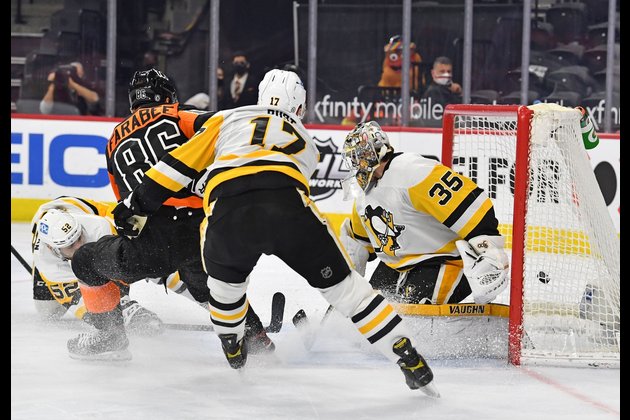 The final meeting of the season between the Pittsburgh Penguins and Philadelphia Flyers on Tuesday takes on more drama than might have been expected primarily because of what happened on Monday.

In the first of back-to-back games between the teams in Philadelphia, the Flyers -- already eliminatedfrom the playoff picture in the East -- spanked the Penguins 7-2.

That not only added an interesting chapter to the cross-state rivalry between the clubs, but it also added an extra hurdle in Pittsburgh's path to a possible division title.

With Pittsburgh falling Monday while Washington beat the New York Rangers 6-3, the Penguins (34-16-3) and Capitals (33-14-5) each have 71 points at the top of the division, but Washington has a game in hand. The Boston Bruins are four points behind, but they have two games in hand on Pittsburgh and three on Washington.

"I don't think we were on our game," Penguins coach Mike Sullivan said. "We weren't skating. We didn't play the game that gives us the best chance to be successful."

Winger Jason Zucker, who scored one of Pittsburgh's two power-play goals Monday, was more succinct about the state of his team's game after the Penguins had won six of the previous seven contests.

"I just don't think we were very good," he said. "We were fighting it from the first shift, it seemed like. It just seemed like everything we did was a step behind. It was a snowball effect for us, and we couldn't really get out of it."

That sets up Tuesday's game at Philadelphia as nearly critical to Pittsburgh's chances of locking up home-ice advantage for at least the first round of the playoffs. The Penguins have two games remaining after Tuesday.

The Flyers, meanwhile, are looking to feed off their win.

"There's no doubt that when you're capable of making the other team pay for some of their mistakes and you get some big saves, it's certainly big as far as confidence," Philadelphia coach Alain Vigneault said.

Pittsburgh is 2-4-1 against the Flyers this season, though the latest setback was uncharacteristic in several ways. The Penguins had been playing a solid two-way game, but they gave up 45 shots to Philadelphia and did not protect the goalies.

That's goalies, plural. Casey DeSmith, in his first start since April 24, gave up four goals on 37 shots through two periods. He then was replaced by Tristan Jarry, who stopped five of the seven shots he faced.

Adding injury to insult, "It was a medical decision," Sullivan said postgame. "Casey was replaced with Tristan because of a lower-body injury. (DeSmith) is being evaluated."

The return Monday of the Penguins' second-line center, Evgeni Malkin, after he missed 23 games because of a suspected knee injury did not provide a spark for the team.

Malkin resumed his normal spot between Zucker and Kasperi Kapanen, played 14:07 and picked up a power-play assist.

While the Flyers slowed the Penguins on Monday, their lot as a playoff outsider cut into their enjoyment.

"It felt good, but the satisfaction isn't as high as if we were playing for something," said Philadelphia winger Jakub Voracek, who registered three assists Monday.

US sanctions causes 90 percent drop in chips sent to Russia

WASHINGTON D.C.: U.S. Commerce Secretary Gina Raimondo has said that since the U.S. and its allies imposed sanctions on Moscow ...