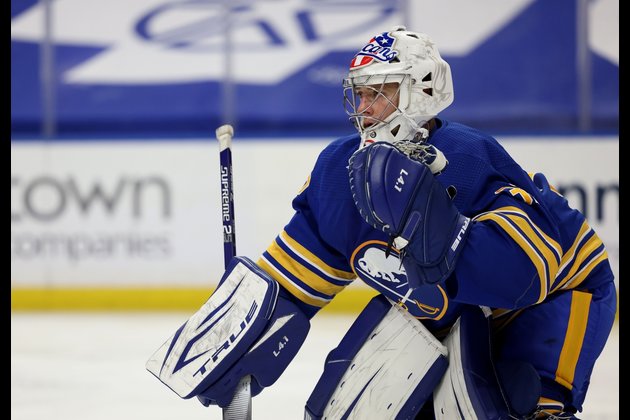 There is the jostling at the top of the East standings to watch, of course. The Pittsburgh Penguins' final two games, Thursday and Saturday at home against the Buffalo Sabres, will help determine the final order among the division's four playoff teams.

The Penguins (35-16-3, 73 points) will haveat least a share of first place going into Thursday's game and have a shot at finishing first in the East or at least wrapping up home-ice advantage for the first round of the playoffs.

But the Sabres (15-32-7, 37 points), while locked into last place in the division, are packing an interesting storyline as they head to Pittsburgh for both teams' final two games of the regular season.

During a week when playoff implications and heated discussions over discipline for Washington's Tom Wilson have made headlines, lowly Buffalo has provided one of hockey's best feel-good stories.

Michael Houser, a 28-year-old undrafted goaltender who had knocked around the minor leagues, mostly at the ECHL level, for several years, played in his first two NHL games this week -- and won both as the Sabres upset the New York Islanders 4-2 Monday and 4-3 in a shootout Tuesday.

Houser is likely to start Thursday and possibly Saturday, and that will take his story to a new level. He is a native of Youngstown, Ohio, not far from Pittsburgh, and grew up and played youth hockey in the suburbs north of Pittsburgh.

"Oh my gosh, it's incredible," Buffalo winger Anders Bjork said of Houser's week. "He's done just an amazing job. You've got to really tip your hat to that guy. We're all so proud of him, and excited for him. We'll keep going."

The two straight wins for the Sabres followed a four-game losing streak. Houser made 79 saves and stopped all three Islanders he faced in Tuesday's shootout.

Houser felt his teammates rally around him.

"You could see it that everyone was kind of playing for each other out there," he said. "I felt like they were playing for me, too."

And now he gets to come home and play in an NHL uniform.

Sabres interim coach Don Granato has listed goalies Ukko-Pekka Luukkonen, Dustin Tokarski and Carter Hutton as out for the final two games. No. 1 goalie Linus Ullmark is practicing as he recovers from an injury, but he is not expected to be available for Thursday at least.

Buffalo has Stefanos Lekkas, up from the American Hockey League on a professional tryout, backing up Houser.

Granato said of the starter for Saturday, "That decision won't be made until game day."

Pittsburgh, meanwhile, is likely to go with No. 1 goaltender Tristan Jarry at least for Thursday. Backup Casey DeSmith is out because of a lower-body injury.

The Penguins are coming off an emotional split of road games against another also-ran, Philadelphia, with the Flyers winning 7-2 Monday before Pittsburgh came back for a 7-3 win Tuesday in a physical game.

That apparently won't change the Penguins' mindset going into the two games against Buffalo.

"There's an element of simplicity associated with our game that gives us a chance to be successful and makes us hard to play against," Pittsburgh coach Mike Sullivan said.

His players are listening and ready to turn the page.

"We just go out there, play our game and we're on to the next," defenseman John Marino said. "We still have the playoffs to worry about."

WASHINGTON D.C.: The White House has reported that the U.S., Australia, Japan, New Zealand and the UK have created an ...