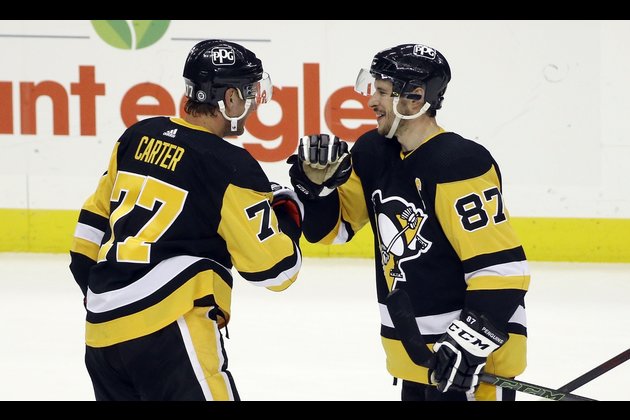 Jeff Carter scored a career-high four goals Thursday as the Pittsburgh Penguins jumped back into first place in the East Division with an 8-4 win over the visiting Buffalo Sabres.

Jared McCann added a goal and two assists, Sidney Crosby and Kasperi Kapanen recorded a goal and an assist each, Brian Dumoulin scored, Frederick Gaudreau had three assists, and Kris Letang and Jason Zucker tallied two assists each for the Penguins.

Drake Caggiula scored twice, Tage Thompson and Jeff Skinner each had a goal and assist, and Rasmus Ristolainen had two assists for the Sabres.

Michael Houser, in his third career start, all this week, made 26 saves in his first loss.

Pavel Zacha scored in the first period and goalie MacKenzie Blackwood made 32 saves for the Devils, who have won five of six following a 10-game losing streak.

Anthony Beauvillier scored in the second for the Islanders, who have lost three straight and six of eight overall to ensure they cannot get home-ice for the first round of the playoffs.

Nils Hoglander, Jayce Hawryluk, Travis Hamonic and Brock Boeser each had a goal and an assist as Vancouver snapped a six-game losing streak with a victory against host Edmonton.

Jack Rathbone scored his first career goal and Tyler Graovac also tallied for the Canucks, who are in last place in the NHL's North Division. Goaltender Thatcher Demko made 39 saves, including one on a penalty shot by Edmonton's Connor McDavid, the league's leading scorer, in the third period.

Leon Draisaitl scored twice and Jesse Puljujarvi also tallied for second-place Edmonton, with all the goals assisted by McDavid. That gave McDavid 96 points this season as he neared the 100-point plateau in the pandemic-shortened 56-game schedule.

DeBrincat scored in all three of the games this week at PNC Arena, though this was the only time the Blackhawks came out on top. DeBrincat has a season-best five-game goals streak and a team-high 29 goals.

The Hurricanes remain in position to finish with the best record in the NHL. They matched a franchise record by stretching their points streak to 13 games, going 9-0-4 in those outings. Petr Mrazek stopped 25 shots and Martin Necas scored a short-handed goal for the Hurricanes.

John Tavares and Mitch Marner both netted one goal and one assist and Auston Matthews became the league's first player to reach the 40-goal mark as host Toronto used a four-goal first period en route to an easy victory over Montreal.

Alex Galchenyuk and Pierre Engvall also scored for the Maple Leafs, who lead the North Division. Goaltender Jack Campbell made 19 saves in the win. Toronto has won six of nine meetings (6-2-1) between the teams this season, with the final clash coming Saturday.

Cole Caufield and Artturi Lehkonen replied for the Canadiens, who have lost two straight but still hold fourth place in the division. Goalie Cayden Primeau was hooked after surrendering four goals on 15 shots in the first period. Jake Allen stopped 19 shots in relief.

Charlie McAvoy scored on the power play, Brad Marchand and David Krejci each had a pair of assists and host Boston blanked emotionally drained New York.

Patrice Bergeron, Jake DeBrusk and Brandon Carlo also had goals for the playoff-bound Bruins, who extended their points streak to six games (5-0-1). Rookie Jeremy Swayman needed to make only 15 saves for his second shutout.

Igor Shesterkin stopped 30 shots for the Rangers, who dropped their fifth straight one day after team president John Davidson and general manager Jeff Gorton were both dismissed.

SEATTLE, Washington: As Americans are continuing to spend and store memberships remain largely intact amidst surging inflation, Costco is expected ...

Starbucks announces closure of all outlets in Russia

SEATTLE, Washington: Following the decision of McDonald's, Seattle-based Starbucks said this week that it will exit the Russian market after ...

Average age of cars on US roads rises to 12.2 years

DETROIT, Michigan: As supplies of new cars and light trucks remain tight due to supply chain issues, U.S. consumers are ...

NEW YORK, New York - The release of the minutes of the Federal Reserve's monetary meeting earlier this month surprisingly ...

WASHINGTON D.C.: Due to seat-belt mechanisms that could explode and shoot out metal fragments in the event of a crash, ...

Average age of cars on US roads rises to 12.2 years

DETROIT, Michigan: As supplies of new cars and light trucks remain tight due to supply chain issues, U.S. consumers are ...

NEW YORK CITY, New York: The market for global online tutoring services is expected to grow from $21 million in ...

WASHINGTON D.C.: A leading U.S. official has said that even if Taiwan is excluded from President Joe Biden's Asian economic ...

SAN ANTONIO, Texas (ANI/Big News Network): The death toll in the mass shooting incident at a school in Texas now ...

The Day the Earth Caught Fire