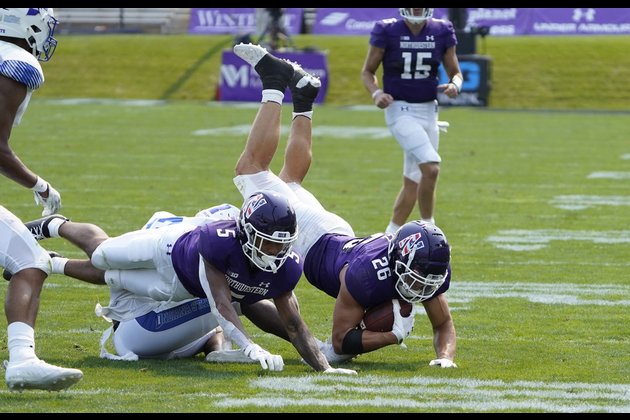 After facing off four straight years from 2015-2018, the Duke Blue Devils and Northwestern Wildcats will renew their nonconference rivalry Saturday at Durham, N.C.

Northwestern won the first two meetings during that four-year stretch before Duke won the next two. The two academic powers have faced each other 20 times since 1985 and each team has won 10 times.

"We are playing a Power Five team, a Power Five program that's a great program, not just a good team," Duke head coach David Cutcliffe said. "It's a huge test as it always is. Two programs that probably mimic each other in a lot of ways."

Cutcliffe and Wildcats head coach Pat Fitzgerald first faced off at the 1997 Citrus Bowl when Cutcliffe was the offensive coordinator at Tennessee and Fitzgerald was a senior linebacker at Northwestern.

The two coaches have developed a mutual respect over the years.

"He's one of the best of the best, and he's got a terrific staff and a very talented team," Fitzgerald said. "We're gonna have to play more consistent in all three phases if we want to be able to compete and win a road contest."

After rushing for 255 yards and three touchdowns against Charlotte, Mataeo Durant had a light workload against the Aggies. He rushed for only 41 yards on 15 carries but scored three touchdowns for the second straight week.

Evan Hull led the Northwestern offense with 126 rushing yards and two touchdowns Saturday. He rushed for 87 yards on nine carries against Michigan State.

Hull, who stepped into the starting role after Cam Porter suffered a season-ending injury before the season, has impressed the Wildcats coaching staff with his work ethic.

"He's worked so hard this offseason to be prepared for the year, and it shows," Fitzgerald said. "He's stronger, he's running behind his pads, he's making people miss, he's finishing runs. I'm just really proud of the complete back he's become."

WASHINGTON, D.C.: Cracking the whip against Big Tech companies, such as Facebook and Google, a bipartisan group of U.S. state ...

NEW YORK, New York - Stocks in the United States rallied on Thursday."This is a follow-on rally from a very ...

WASHINGTON, D.C.: U.S. Senator Richard Blumenthal has written to the Transport Department, warning that a partnership between American Airlines and ...

WASHINGTON D.C.: In U.S. government emails, as reported by Reuters, India's decision in July to ban MasterCard from issuing new ...

On September 15, 2021, the heads of government of Australia, the United Kingdom, and the United States announced the formation ...

WASHINGTON D.C.: In a move that highlighted the Biden administration's frustration, the U.S. this week added Guatemala Attorney-General Consuelo Porras ...

WASHINGTON D.C.: Tigers and lions at the Smithsonian's National Zoo in Washington, which were infected last week with COVID-19, are ...

At auction, first printing of U.S. Constitution could see $20 million

NEW YORK CITY, New York: Auction house Sotheby's announced that it will auction a rare first-edition printed copy of the ...

WASHINGTON, D.C.: U.S. Senator Richard Blumenthal has written to the Transport Department, warning that a partnership between American Airlines and ...

California trees, homes wrapped in aluminum to protect from wildfires

MEYERS, California: Contractor Martin Diky said that he panicked when a wildfire began advancing toward his mountain house in Meyers, ...