A 'Single Voting Day' In Russia...Held Over Three Days 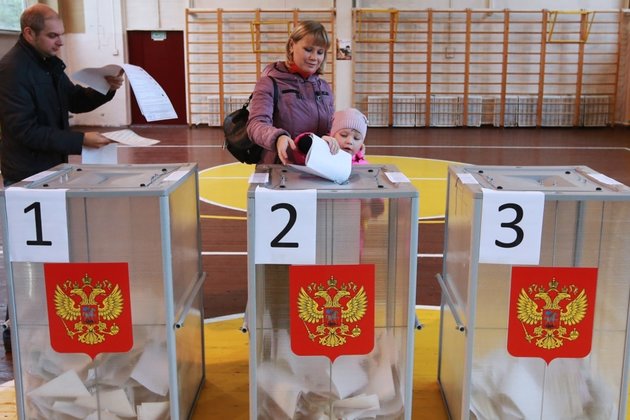 As the old joke goes, the Soviet Union was heralded for producing the world's largest microchips and the fastest watches. But Russia alone can lay claim to having a 'single voting day' over a span of three days.

The holding of Russia's myriad local, regional, and nationwide elections has been streamlined in recent years, clearing up electoral calendars by scheduling races big and small on a single day across the country.

Like everything else of late, it appears the coronavirus pandemic threw a wrench in the plan, and in the process helped create a three-day voting window that critics say could benefit the ruling United Russia party.

Russia's first-ever nationwide vote held over multiple days came after the government had awoken late to the seriousness of the pandemic. With the country under lockdown, a nationwide vote to cement Kremlin-backed constitutional amendments, including one allowing President Vladimir Putin to seek two more terms and potentially rule until 2036 -- was postponed from its original date in April.

When the coast was clearer the vote was held from June 25 to July 1 and the amendments, one of which gave a green light for elections to be held over two or three days, became the law of the land. By the end of July, Central Election Commission (CEC) head Ella Pamfilova was proposing that the September elections for regional parliaments and 18 regional heads should have two additional days of early voting.

'This is not our whim, it's a demand of the times,' Pamfilova told a meeting of the CEC, suggesting it would stem the transmission of COVID-19 by keeping polling stations less crowded. 'We are continuing to proceed from the priority that the president has outlined very clearly and never stops repeating: the health and safety of our citizens during any events, including such important ones as elections.'

After the vote was indeed held over three days, independent media began to peel back the onion on the process.

'Everybody's A Winner!' blared a headline by Meduza, a little under seven months before the online news outlet would be branded a 'foreign agent.' 'Russia's New Three-day Voting Scheme Delivers Huge Victory Margins For Incumbent Governors...'

The outlet went on to explain that in seven of the 18 gubernatorial races, 'the authorities' candidate won more than 80 percent of the ballots cast' and in six others garnered more than 70 percent of the vote.

Juxtaposing those results to 2019, when elections for 16 regional heads were held, Meduza noted that just four candidates took more than 80 percent of the vote, and only three won more than 70 percent.

'In other words, Russian officials' decision to spread voting across three days has obviously benefitted the state authorities' candidates,' the outlet concluded.

The upcoming 'unified' State Duma, gubernatorial, and mayoral elections -- as well as balloting for regional and local legislatures -- have raised similar concerns.

A needs-assessment mission from the Organization for Security and Cooperation in Europe (OSCE) acknowledged the challenges of gathering people to vote during a pandemic, saying in May that some participants in the mission saw the 'possibility of the extended voting period as a positive measure to decrease overcrowding at polling stations and decrease the risk of COVID-19 transmission.'

But others 'expressed concerns related to the secure storage of the election material at night during multi-day voting, and opined that it might affect the integrity and limit transparency of the process," it said.

After the Russian authorities said it would only accept 60 of the OSCE's requested team of 80 long-term observers and 420 short-term observers to oversee the vote due to coronavirus concerns, the widely respected election monitor decided not to send a team at all.

'The national authorities cited the epidemiological situation as the reason for the limitations,' OSCE spokesperson Katya Andrusz said in written comments to RFE/RL this week. 'However, no pandemic-related entry restrictions or rules about operating and moving within the country would seem to prevent the deployment of a full election observation mission in line with ODIHR's initial assessment.'

The vote will go on -- over three days and without the OSCE -- and many pundits expect the situation to boost the United Russia party despite indications that it is suffering an all-time low in popularity.

Three-day voting is "the biggest threat to an honest vote" because it makes the balloting three times harder for an already limited number of observers to monitor, Stanislav Andreichuk, a leader of the voter's rights group Golos, wrote this week.