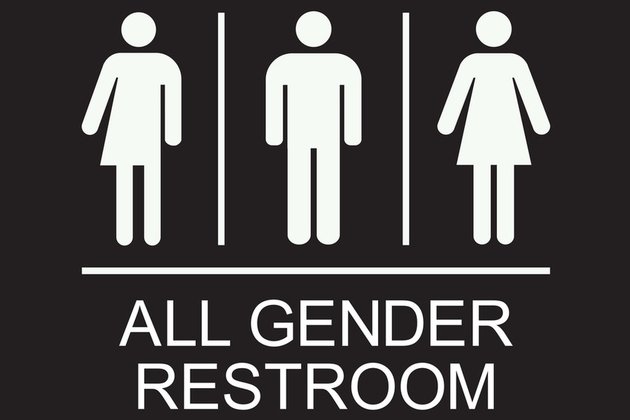 In the possessed spirit of these woke times, Chicago Public Schools has moved to designate restrooms free-for-alls to promote ?inclusivity.? The only thing the initiative will achieve, however, is to confuse and endanger students.

Back in 1972, a famous television commercial, sponsored by the United Negro College Fund, extolled the virtues of a wholesome education by proclaiming, "a mind is a terrible thing to waste." What a difference half a century has made. Today, the slogan would be more accurate if it proclaimed, 'a radical liberal agenda to screw with the minds of children is a terrible thing to waste.'

Chicago Public Schools (CPS), putting its woke credentials on full display, has mandated that institutions make restrooms 'gender-neutral,' thereby allowing students to relieve themselves in restrooms that align with their gender identity, and I'm guessing pronouns, too.

It's almost as though CPS never heard the recent story about the boy who, allegedly dressed in a skirt, proceeded to rape a female classmate in a girls' restroom at Stone Bridge High School in Ashburn, Virginia. The parents of the sexually assauled girl said the now-charged teenager was "gender fluid" sparking backlash against the school's policy that allows students to use the restrooms that match their gender identity. (That policy, however, was introduced after the assault.) Instead of coming clean about the incident, administrators quietly transferred the boy to another school, where he allegedly committed - surprise! - yet another sexual assault against a female.

Separating biological males from females in bathrooms and locker rooms is such a no-brainer that it seems ridiculous wasting time discussing it. Yet school administrators continue to act as though sexual predators have been safely confined to horror fiction, or that females have never been raped before. Their primary concern is to massage their egos by virtue-signaling on behalf of ill-conceived legislation. Everyone deserves protection, but to cast the 99 percent to the wolves out of concern for the one percent is yet another liberal experiment doomed to explode.

Mary Ann Fergus, CPS Executive Director of Media Relations, justified the unisex bathroom mandate by saying: "Our restrooms are open for use to anyone who feels comfortable in that space." Note that all of the focus is on the 'comfort' of the 'gender-fluid' individual, while providing zero consideration to the majority of females who must use the facilities on a daily basis.

For anyone who may have trouble envisioning what sort of response many females would have when it comes to sharing the restroom with members of the opposite sex, this video by YouTube personality Joey Salads is a very good place to start.

The problem, however, goes beyond the threat of physical assault, as serious as that is. There is also a very real 'mental assault' being committed against children. When schools endorse such 'gender-fluid' restroom policies, they are exposing elementary-school children to highly complex ideas that are far beyond their mental abilities to grasp. It's not as though these restroom policies exist in a vacuum; young schoolchildren are already being exposed to transgender ideology inside of the classroom, where indoctrinators encourage kids to 'question their gender.'

Suggesting to young and impressionable children that they may be 'trapped in the wrong body' has led to a wave of 'gender dysphoria' among youth, predominantly among girls, who become completely confused about their sexuality. The result is that an increasing number of adolescents seek to alter their bodies with the assistance of radical medical techniques, including irreversible surgical procedures, a lifetime of hormone drugs, and even puberty blockers. The medical community is slowly awakening to the risk of these 'transitioning' techniques as many of the recipients say they regret having made the decision of going through with these life-altering decisions.

Western education is stuck in the proverbial toilet because that is really where the brains of educators have been focused for the last decade or so. Last month, for example, a high school in Austin, Texas removed the doors from its bathrooms in a lamebrain quest to create a "safe environment." Apparently the occasional marijuana deal and cigarette break was going down in the loo, as they have been forever, so the best course of action was to destroy - in true totalitarian fashion - the freedoms enjoyed by the majority due to a few bad apples.

Looking for some good reading material in that unisexual toilet? Fairfax County School Board in Virginia has said it would return to its library bookshelves glorious works of literature with inspirational titles like, "Gender Queer: A Memoir" and "Lawn Boy," which graphically depict - with illustrations - sexual acts between adults and children. In other words, what the US criminal law typically refers to as 'pedophilia.'

Parents from the Virginia school district had hoped to force the books off the library shelves and into the dumpster, but the school board voted, in all of its collective wisdom, to keep these titles available to "serve the needs of LGBTQ+ students." That's very strange. After all, nowhere is the initial 'P' to be found in the LGBTQ+ acronym parade. But if it has been snuck in there somewhere, along with the other rubbish, then perhaps someone should call the cops, not the school librarian.

Personally, my question with regards to this escalating madness is how so many generations of Americans passed through the public education system without the necessity of hearing about transgender lifestyles, gender equity, unisex toilets, and the like. The general rule was that not until senior year in high school (1984, in this author's case) did students get that first uncomfortable 'sex education' lesson, which endorsed the irrefutable biological fact, clearly observable under the microscope, that humans exist due to the existence of XX and XY chromosomes, identifying females and males, respectively. Mindless chatter today about the existence of dozens of gender types is flights of fancy that simply confuses the youth and some adults, which is most likely the motivating factor behind all of this craziness.

So how to escape the institutional madness that seems to have settled on America for the long haul? One answer among an increasing number of parents seems to be homeschooling their children. The movement got its impetus in part from the shortsighted Covid lockdowns, when children were forced to attend classes remotely via Zoom. Alice Salles, from the Libertarian Institute, observed that the pandemic gave parents a golden opportunity to understand firsthand "just how abysmal the curricula and tutelage were."

These new perceptions about the US public education system, none of them very positive, forced many families to make the transition to homeschooling. Citing statistics from the US Census Bureau, Salles noted that from 2012 to 2019 the homeschooling rate was around 3.3% of US students from kindergarten-to-12. The figure jumped to 5.4% by Spring 2020. By fall of last year, it had more than doubled, to 11.1%.

While some of the change in attitude could be attributed to the Covid pandemic, judging by the outpouring of anger and frustration that have become a regular part of school-board meetings these days, some of the fallout is due to the perception that the US public school system is simply failing children. Too many parents fear that woke nonsense is being passed off to their children inside of the classroom under the guise of 'education.'

While it's not an option open to everyone, homeschooling is one very effective way of sending a message to the government that parents are no longer willing to accept the indoctrination of their children with concepts that border on pure insanity.