The long fight against sexual assault and harassment at universities 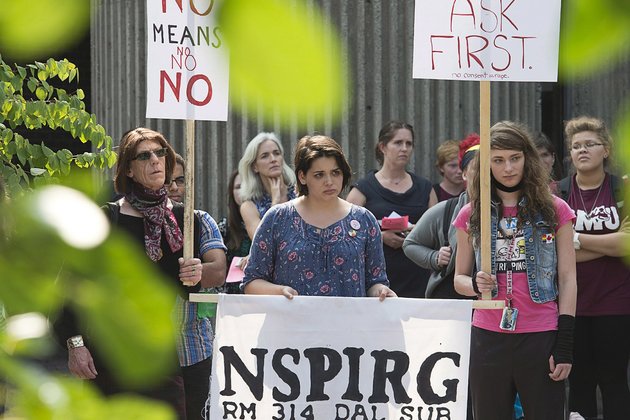 With the return to university campuses this fall, there have been disturbing reports of both sexual assaults and sexist incidents.

At Western University, for example, four students reported being sexually assaulted and there was mass student mobilization following social media reports of numerous sexual assaults at a residence. Police say while they have been unable to confirm social media accounts about students being drugged and assaulted in a university residence, the investigation remains open. Advocates say social media has urgently revealed a larger problem that victims are often reluctant to formally report.

During homecoming at Queen's University, messages flew from the windows of two student houses that read: "Western guys wish they were Pfizer so they can get inside her" and "Lock up your daughters, not Kingston."

Women have long experienced unwanted sexual advances - and women who are vulnerable because of racism, colonialism, poverty or living circumstances are more likely to experience harassment and assault.

The term "sexual harassment" was coined in 1975, when feminists in Ithaca, N.Y., gathered to support a university administrator who had resigned because of a faculty member's persistent sexual advances. The group issued a press release condemning "sexual harassment" - the first recorded use of this term.

The movement quickly spread across the United States and Canada. In 1977, Ms. Magazine highlighted the problem with a dramatic cover, showing a photo illustration of a boss with his hand groping his secretary's breast.

The book featured seven case studies. One was a graduate student whose supervisor unexpectedly showed up at her house, showered her with poems and kissed her without permission.

Also in 1978, the University of Ottawa fired professor Rudi Strickler for his repeated harassment of a female student. While this wasn't the first case of sexual harassment at a Canadian university, it was the first case that received wide publicity.

University of Guelph psychology professor Norma Bowen also gave speeches at universities across Canada on sexual harassment in 1980 and 1981. Bowen had researched the racial implications of police hiring and was working on a book on sexual harassment when she passed away in 1986.

In April 1980, York University established a presidential advisory committee on sexual harassment, the first Ontario university to create such a commission. Established in 1959, York was a young university. Its youthful faculty and activist student body made it a hotbed of feminist organizing.

In the late 1980s, women activists expanded their efforts to change the sexist climate that existed at Ontario Universities.

In 1988, Anne Innis Dagg, a zoologist and feminist activist who has spoken publicly about facing gender discrimination in her work and in universities, published MisEducation: Women and Canadian Universities, detailing the sexism female students faced.

Dagg described engineering students at a University of Toronto orientation event simulating the rape of a doll with a beer bottle and a McGill fraternity that circulated a poster of a woman who appeared to be enjoying a gang rape.

In 1989, Fleurette Osborne, the first National President of the Congress of Black Women of Canada and an anti-racism activist, published a condemnation of the racism and sexual harassment women of colour faced on university campuses in the CAUT bulletin.

That same year, mainstream media reported on the sexist climate on university campuses when male students at a Queen's University residence put up signs mocking a "no means no" campaign. The signs read "no means maybe," "no means have another beer," "no means tie me up" and "no means kick her in the teeth."

Despite calls for the perpetrators be punished, the Queen's main campus residence council decided that it would be unfair to punish a few students when a larger group was probably involved.

A new group, The Radical Obnoxious Fucking Feminists, responded by painting "no means no" all over campus and sending letters to the parents of the men involved. About 30 women, wearing scarves to hide their identity, occupied the principal's office to protest the administration's lack of action.

The principal established a working group on gender issues, which recommended cracking down on a variety of sexist traditions and rituals at Queen's such as rugby songs with pro-rape lyrics and the "slut of the week" feature in a student newspaper. These recommendations would all be approved by senate the following year.

A month after the events at Queen's, the murder of 14 women at Montreal's Ecole Polytechnique by a man who blamed feminists for his failures, made the culture of misogyny shockingly evident.

In 1993, the provincial government released guidelines requiring universities to enact policies that would create a "an offensive, hostile or intimidating climate for study or work."

These guidelines were partly in response to a 1992 report by the province's advisor on race relations, Stephen Lewis, former NDP provincial party leader, delivered to Bob Rae's NDP government. The report named anti-Black racism as a particular problem and called for universities to make their boards representative, to train more "visible minority" teachers and to adopt anti-discrimination measures.

The government eventually withdrew these guidelines, but a number of universities changed their policies.

As recent events show, sexual harassment at Ontario universities has not gone away, despite decades of women's activism.

A 2018 survey showed that over 60 per cent of Ontario university students experienced sexual harassment one or more times. Journalist Eternity Martis's account of her years at Western shows how widespread sexual harassment continues to be, and how Black and racialized women face additional barriers of racism.