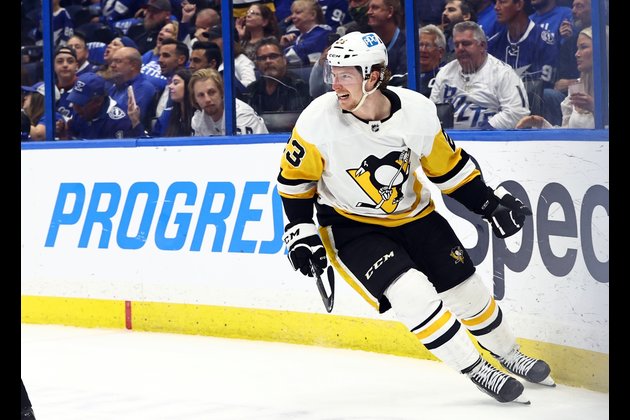 The Pittsburgh Penguins can now focus on picking up a pair of big road prizes on consecutive nights.

On Friday night in Raleigh, N.C., the Penguins take on the Carolina Hurricanes, who are trying to recover from a rare outing that didn't produce any goals.

"It was one of our more complete efforts all year long," Penguins coach Mike Sullivan said.

"Our players love the high-stakes environment," Sullivan added. "They love playing on the big stage. And they've shown the ability to have success when they've been there. We are excited about the opportunities that are in front of us. We understand that it's hard."

With Tristan Jarry getting the call in the net for Pittsburgh on Thursday, the Penguins might turn to Casey DeSmith for the Carolina game. However, Jarry faced just 21 shots from the Lightning.

It will mark the first appearance as a visitor in Raleigh for Penguins left winger Brock McGinn, whose time with the Hurricanes was highlighted by a Game 7 series-winning goal against Washington in 2019.

"(McGinn) helps us win games, whether he's on the scoresheet or he's not," Sullivan said. "He's a glue guy. He's hard to play against."

McGinn is in his first season with the Penguins after spending his first six seasons with Carolina. Based on seeing other ex-Hurricanes play against the home team in Raleigh, he'll be showered with appreciation -- particularly because he was a popular player during his Carolina days.

McGinn has 11 goals in 53 games this season after scoring 15 in 105 games the past two seasons with the Hurricanes. He scored Thursday night.

For Carolina, this will mark back-to-back games against Metropolitan Division contenders. The Hurricanes are 9-5-0 vs. division foes.

"They're top teams that we're going to have to face," Hurricanes coach Rod Brind'Amour said.

The Hurricanes didn't fare so well Thursday night, falling 4-0 at Washington. It was just the second time this season that Carolina was blanked.

"We've got quality people in there," Brind'Amour said of the ability to bounce back. "They know they didn't play a great game (in Washington)."

With three games in four days, Friday night's game could be another opportunity for Carolina goalie Antti Raanta. He turned in a strong outing Tuesday in an overtime loss at Detroit.

Carolina won 4-3 at Pittsburgh on Feb. 20 in a game that was moved from the end of the schedule to fill in spots during the reconstructed February slate.

The Hurricanes have had a penchant for regrouping after disappointing results.

Don't expect a let-up from the Penguins though.

"The hunger for more," Sullivan said of the motivation. "Our guys (are) not satisfied. Their appetite to be the best, for me, has been second to none."

NEW YORK, New York - Stocks were decidedly mixed in the U.S. on Tuesday as investors struggled to make a ...

NEW YORK, New York - U.S. stocks continued to mend fences on Monday, with gains by all the major indices."I ...

US gas prices below $4 per gallon after demand falls

WASHINGTON D.C.: Providing relief to drivers in the United States, the average retail gasoline price in the US fell below ...

NEW YORK CITY, New York: Walmart could sign a deal with Disney, Paramount, or Comcast, with the aim of breaking ...

Would a new Cold War be in the best interest of the United States?

As China unleashed live-fire military exercises off the coast of Taiwan, simulating a real "reunification by force" operation in the ...

SACRAMENTO, California: California Governor Gavin Newsom is proposing to give a $1.4 billion government loan to extend the life of ...

US ends Covid restrictions, cites 95% have vaccines or immunity

NEW YORK CITY, New York: After a study released on Wednesday projected a 15 to 20 percent reduction in the ...

'U.S. threatened to topple my government due to independent foreign policy': Imran

ISLAMABAD, Pakistan - According to information released on Friday, Pakistan Tehrik-e-Insaf, (PTI) has hired a lobbying firm with offices in ...