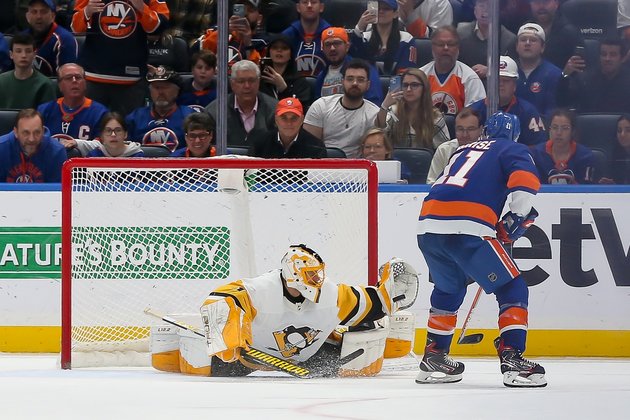 Jake Guentzel had two goals and two assists Thursday as the Pittsburgh Penguins clinched a playoff spot with a 6-3 win over the visiting New York Islanders.

Letang opened the scoring for Pittsburgh at 4:59 of the first period. Guentzel, from deep, fed Letang at the left point. Letang moved a little to his right, then beat Sorokin on a screened shot.

At 8:52 of the first, Heinen upped the Penguins' lead to 2-0. Brian Boyle found him for a long breakaway as Heinen came out of the penalty box after serving a slashing minor, and the center beat Sorokin between the pads.

Parise cut it to 2-1 at 5:51 of the second period. Mathew Barzal carried the puck up the left side and deep into the Pittsburgh end, then curled back out toward the slot before passing over to Parise in the lower part of the right circle. Parise put a shot past Jarry's glove.

At 12:10 of the second, Guentzel restored the Penguins' two-goal edge. On a two-on-one against Chara, Crosby got a pass through to Guentzel, whose shot from the right circle went between Chara's skates and past Sorokin far side to make it 3-1.

With a two-on-none after an Islanders turnover, Guentzel and Crosby played give-and-go, with Crosby squeaking the puck inside the right post to make it 4-1 at 10:44 of the third period.

That gave Crosby 80 points on the season.

Lee jammed the puck in from a crowd at 17:23 of the third, McGinn scored an empty-netter 36 seconds later, and Chara made it 5-3 with 1:08 left on a blast from the left-wing boards.

WARREN, Ohio: Next month, workers at a General Motors-LG Energy battery cell manufacturing plant in Ohio will decide whether to ...

LOPS ANGELES, California: To deter shoplifters and thieves during the post-COVID-19-pandemic rush of holiday shoppers this year, many U.S. retailers, ...

WASHINGTON D.C.: According to the minutes from Federal Reserve's meeting held on 1st and 2nd November, a "substantial majority" of ...

BUFFALO, New York: Just ahead of the busy Thanksgiving holiday week, western New York state was hit by a snowstorm, ...

LOS ANGELES, California: Lyft and driverless technology firm Motional have announced the joint operation of a robotaxi service for residents ...

Lab-grown meat cleared by US for human consumption

WASHINGTON D.C.: The U.S. Food and Drug Administration (FDA) has announced that, for the first time it has cleared a ...

CLEVELAND, Ohio: After vandals broke into a farm and released up to 40,000 minks from their cages this week, thousands ...