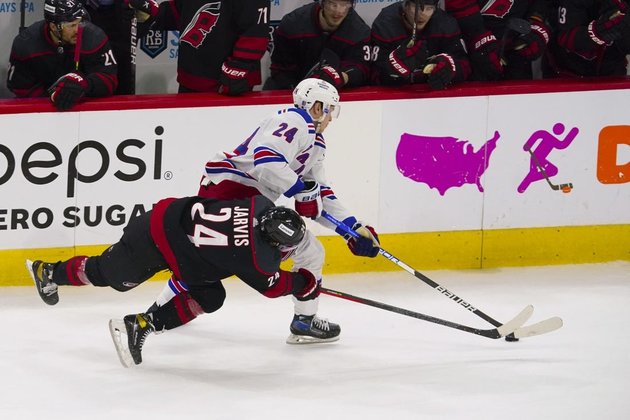 Through two games, the Carolina Hurricanes are getting just enough offense while their defense is hardly giving the New York Rangers any time or space to create much of anything.

By constantly bottling up a potent offense, the Hurricanes have established control of the second-round playoff seriesand they look to continue their effective defensive play Sunday afternoon as they take a 2-0 series lead into New York for Game 3.

Carolina has scored four goals so far but has conceded one. The Hurricanes have allowed 49 shots on goal through the first two games and have also blocked 39 shots, including 24 in their 2-0 win in Game 2.

After rallying in the third period and opening the series with a 2-1 overtime win on Wednesday, the Hurricanes got a short-handed goal from former Ranger Brendan Smith with 4:06 left in the second period during a four-minute New York power play in Friday's 2-0 win.

"I think if we just stick to our style, it's eventually going to wear on teams and we're going to find a way to win," Smith said.

In the first round, the Hurricanes needed seven games to beat the Boston Bruins because they allowed 14 goals in their three road games.

Carolina is the first team to win its first six home playoff games since Nashville in 2017. The Hurricanes have won six of seven series when winning their first two home games.

After producing few scoring chances among its 21 shots against Antti Raanta on Friday, New York is hoping to find some of the offense that produced 27 comeback wins in the regular-season and three more in the first round against Pittsburgh. The Rangers won three of four home games in the opening round, including Games 5 and 7 to complete a comeback from a 3-1 series deficit.

"I think nothing's really rattled this team or shook this team," New York defenseman Jacob Trouba said. "It's keep your head down and play that next game. We've been down in games, we've been down in series, we've been in holes before. We just keep grinding our way out and that's what we're going to do. We're going to Game 3 and grind away and hopefully find a way to win that game."

The Rangers are hoping to get some of their star offensive players going along with a power play that went 0-for-4 and totaled two shots on goal in Game 2.

"I'm happy with the way we've performed overall," Rangers coach Gerard Gallant said. "I wish we would've got one of these two games. We probably could've, but that's the way it goes."

Artemi Panarin sent the Rangers into the second round when he scored the game-winner in overtime to beat Pittsburgh but has taken two shots on goal so far. Mika Zibanejad has taken four shots on goal while Chris Kreider has only one shot on goal through two games.

"They're great players. We took their time and space. I think that's the big thing," Smith said. "There are a lot of times when (Panarin) tries to create his space, but if you stay with him, try to take that space away from him, he can't make those elite plays."

US sanctions causes 90 percent drop in chips sent to Russia

WASHINGTON D.C.: U.S. Commerce Secretary Gina Raimondo has said that since the U.S. and its allies imposed sanctions on Moscow ...