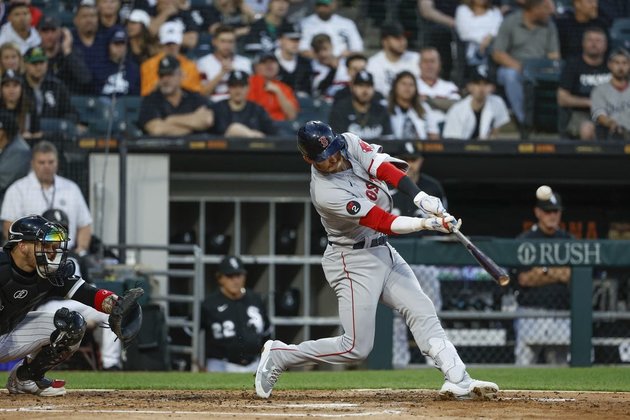 Trevor Story hit a three-run homer and drove in four runs to continue his tear, Alex Verdugo had four hits and three RBIS and the visiting Boston Red Sox recorded a 16-7 victory over the Chicago White Sox on Thursday night.

Story hit an RBI single during Boston's three-run first off Dallas Keuchel (2-5) and added a three-run homer in the second as the Red Sox opened a 6-0 lead.

Story hit his ninth homer this month. He has 32 RBIs in his past 21 games after driving in five runs in his first 18 games with the Red Sox, the team he joined as a free agent in March.

The Red Sox won for the seventh time in eight games as five players collected multi-hit games. Boston scored 16 runs for the second time in the series, which it won two games to one.

Verdugo posted his fourth career four-hit game, matching his career high. He had a pair of RBI doubles before adding an RBI single in Boston's five-run eighth.

Enrique Hernandez hit his second leadoff homer of the series two pitches in while Christian Vazquez had a pair of RBI singles among his three hits. Christian Arroyo and Bobby Dalbec also contributed RBI singles as the Red Sox tied a season high with 19 hits and went 10-for-24 with runners in scoring position.

The Red Sox scored their final runs on a two-run homer by Kevin Plawecki off Chicago infielder Josh Harrison in the ninth.

Chicago's Andrew Vaughn drove in a career-high five runs. He hit a two-run double and a three-run homer.

Keuchel allowed six runs on seven hits in two innings. It was the second straight time the left-hander gave up six runs, as he did so in four innings on Saturday in a loss to the host New York Yankees.

As prices of EVs fall, manufacturer Rivian to reduce workforce by 6%

IRVINE, California: In an effort to cut costs in preparation for an industry-wide price war, electric vehicle manufacturer Rivian Automotive, ...

DALLAS, Texas: The Dallas Police have announced that two emperor tamarin monkeys that disappeared earlier this week from the Dallas ...

Republicans in Congress to impeach border official due to migrants

WASHINGTON D.C.: In a sign of future political battles over record numbers of illegal crossings under Democratic President Joe Biden, ...

MOSCOW, Russia: Russian state-run TASS news agency has reported that a US woman was detained and fined by a Russian ...

At US urging, Japan to stop exporting chip technology to China

TOKYO, Japan: Japan is preparing to revise legislation to allow it to restrict the export of advanced semiconductor manufacturing equipment ...