CF Montreal edges Sounders to move into tie atop conference 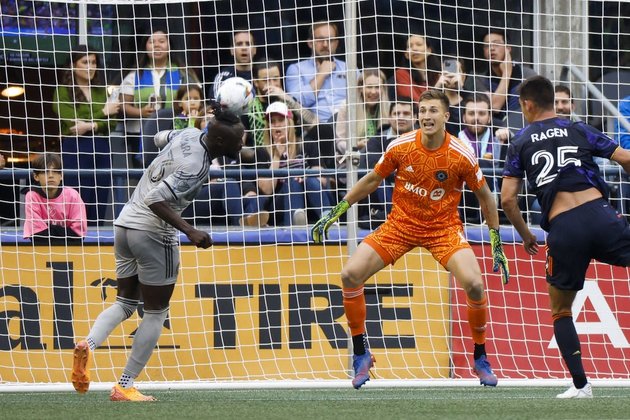 Mason Toye scored twice, both off assists from Kei Kamara, as CF Montreal overcame an early deficit to defeat the host Seattle Sounders 2-1 in an MLS match Wednesday night.

The victory moved Montreal (9-6-2, 29 points) into a tie with Philadelphia atop the Eastern Conference.

Toye scored the winner in the 62nd minute, just before coming off for a substitute. Kamara dribbled to the end line on the left wing before sending a low cross for Toye, who cut in front of defender Nouhou Tolo to redirect the ball over the outstretched hands of Seattle goalkeeper Stefan Frei from about four yards out.

Morris gave the Sounders a 1-0 lead just 2 1/2 minutes into the game. Cristian Roldan won the ball just shy of midfield on the right wing and sent a through ball to Morris, about 30 yards out in the middle of the field. Morris dribbled the ball to the top of the 18-yard box before getting turned around by defender Mathieu Choiniere, but then spun back toward the goal and put a low, right-footed shot from 15 yards through Choiniere's legs, under diving goalie Sebastian Breza and into the side netting inside the left post. It was Morris' 50th career goal in all competitions for the Sounders.

Montreal tied the score in the 18th minute as Kamara stole the ball from rookie defender Jackson Ragen near midfield to start a two-on-one break. Kamara fed Toye near the top of the 18-yard box on the left wing and he put a screaming left-footed shot from about 12 yards into the far side netting.

Montreal had other chances in the first half, but Frei made two saves in the half, including a diving stop on a 20-yard shot by Matko Miljevic in the 34th minute.

The Sounders had two strong chances in the opening three minutes of the second half.

Breza made a diving stop on a shot by Roldan and was just able to cover the rebound before Fredy Montero arrived. Roldan put a header off a corner kick just wide of the top right corner of the net a minute later.