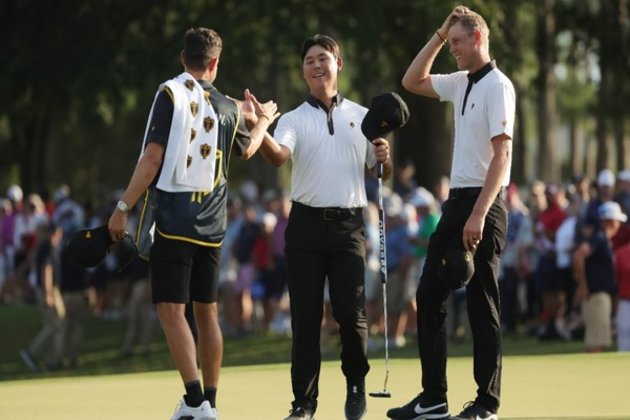 Charlotte [US], September 24 (ANI): Korea's Si Woo Kim and Australia Cam Davis produced a brilliant fightback to deliver the International Team's lone point in round one's Foursomes session at the Presidents Cup as the United States romped to a 4-1 lead here at Quail Hollow Club on Thursday.

Kim and Davis, both captain's picks, were 3-down through seven holes to World No. 1 Scottie Scheffler and Sam Burns in the penultimate match but won their last three holes, which included birdies on the 16th and 17th, and secured a 2-up win which prevented whitewash by the powerful American side.

"It was a brutal start, and then we got nervous. In the last five holes, we finally dropped some putt and it works. When we announced our names on the first hole, I was shaking. I don't have experience much. And, yeah, it kept going through 5, 6 (holes), I'm getting pissed off because I'm losing. Then Cam makes a clutch putt on 10 and I think that's the time my nerve is gone. And then, yeah, 16 finally the right time to make it (a putt). And 17 Cam hit a great shot (for birdie). It was, I think, perfect timing," said Kim, who is a three-time PGA TOUR winner.

Patrick Cantlay/Xander Schauffele got the home team off to a flying start with a 6 and 5 win over Adam Scott/Hideki Matsuyama, sealing their third straight win as partners in Foursomes.

The final match concluded on the 18th green with Tony Finau/Max Homa wrapping up a thrilling 1-up win over Taylor Pendrith/Mito Pereira when the Internationals made a costly bogey on the last hole after fighting all the way down the stretch.

Davis, a former Australian amateur champion and a one-time PGA TOUR winner, hopes the vital point will provide the spark for an International fightback in Friday's Fourball session and narrow the gap on the U.S. Team, which 12 players are all ranked in the world's top-25. The U.S. has won 11 of 13 editions of the Presidents Cup, including a narrow 16-14 victory at the last playing at Royal Melbourne in 2019.

International Team captain Trevor Immelman knows the importance of getting a point on the board when at one point, it looked as though the Americans would make a clean sweep in all five matches before Kim and Davis produced the stunning comeback.

"Just so proud of those guys. Cam has been chomping at the bit for the longest period of time. You know, we really feel like he's come out of his shell quite a lot in and amongst the team atmosphere and environment in the last three or four weeks, and it's been great to see that growth from him," said Immelman.