Peace can be ensured across Taiwan only when China is completely 'reunified': China at UNGA 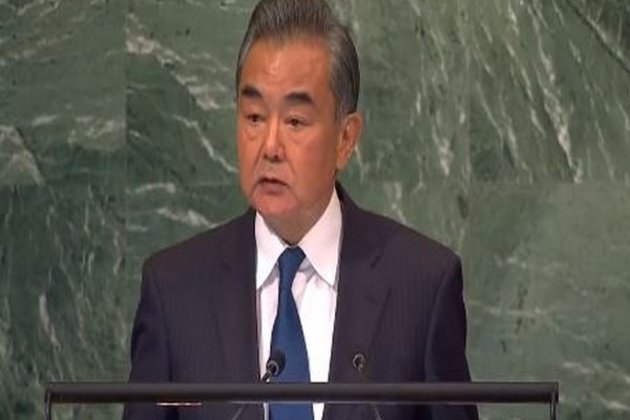 New York [US], September 25 (ANI): Reiterating its claim over Taiwan, China on Saturday said peace across Taiwan can be ensured only when China is completely reunified with the self-governed island nation and any move to obstruct China's reunification is bound to be crushed by the wheels of history.

"Only when China is completely reunified can there be enduring peace across Taiwan. Any scheme to interfere in China's internal affairs is bound to meet the strong opposition of all Chinese and any move to obstruct China's reunification is bound to be crushed by the wheels of history," Chinese Foreign Minister Wang Yi said at the 77th Session of the United Nations General Assembly.

Wang Yi said that all "stolen" territories including Taiwan shall be restored and reiterated that Taiwan has been an inseparable part of China's territory.

"Since ancient times, Taiwan has been an inseparable part of China's territory...It is explicitly stated in the Potsdam Proclamation that all the territories that Japan has stolen from the Chinese including Taiwan shall be restored to China," the Chinese Foreign minister said.

China's ruling Communist Party claims that Taiwan is part of its territory, despite having never governed it, and has refused to rule out the use of force to bring it under control.

In line, after the US House speaker Nancy Pelosi visited Taiwan last month, China has over time reiterated that there is only one China in the world and Taiwan is an inalienable part of China's territory. China claims that the government of the People's Republic of China is the sole legal government representing the whole of China.

China's Foreign Ministry condemned Pelosi for what it described as her "vicious and provocative actions," saying her trip to Taiwan amounted to "seriously interfering in China's internal affairs." China also increased its military activities around the Island nation.

Amid the tension between US and China, US Secretary of State Antony Blinken met his Chinese counterpart Wang Yi on Friday and stressed for preserving peace and stability across the Taiwan Strait.

Over an hour-long meeting, Blinken emphasized that the United States is committed to maintaining peace and stability across the Taiwan Strait, consistent with its longstanding one-China policy.

Both leaders discussed the need to maintain open lines of communication and responsibly manage the US-PRC relationship.

Meanwhile, Taiwan has rejected China's "one country, two systems" formulation, believing that only the people of Taiwan can decide their own future.

Taiwan has faced the threat of invasion ever since the end of the Chinese Civil War in 1949, when Chiang Kai-shek's defeated Nationalists fled there to set up a new government, having been chased out of the mainland by Mao Zedong's Communist Party.

More than 70 years later, the Communist Party continues to view Taiwan as something akin to a breakaway province that must be "reunified" with the mainland at all costs -- and it has made clear it is prepared to use force, if necessary, to fulfil that objective. (ANI)