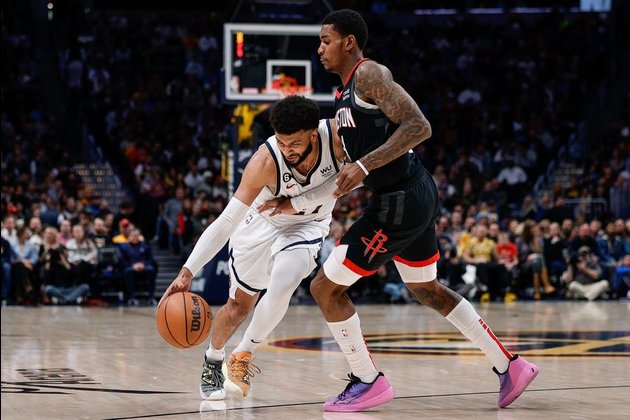 The Nuggets led by three points midway through the first quarter before Denver took control. Kentavious Caldwell-Pope hit a 3-pointer, Murray made a layup and Gordon scored four points to put Denver ahead 29-19.

Porter made a technical free throw but Cancar scored eight points in less than a minute (the last coming on a dunk) before Ish Smith made a layup and then fed DeAndre Jordan for a dunk and a free throw to spark the Nuggets to a 44-24 lead at the end of the first quarter.

Denver continued to dominate in the second quarter. Jordan had a dunk, Brown hit his third 3-pointer of the game, Cancar made a reverse layup off an offensive rebound, and Murray hit a 3 to double up Houston, 56-28, with 7:24 left in the half.

Smith hit a 3-pointer that was quickly answered by Gordon's 3 -- a shot that sparked eight straight points for the Nuggets and a 64-31 lead.

Denver went to the locker room ahead 74-47, the most points the team has scored in a half this season.

Green hit two 3-pointers and Sengun dunked to spark a 10-3 Houston run to open the third quarter that cut the Nuggets' lead to 77-57. Denver responded with a quick run to get the lead to 26.

The Rockets got within 19 late in the game but never threatened to make a game of it the rest of the way.

As prices of EVs fall, manufacturer Rivian to reduce workforce by 6%

IRVINE, California: In an effort to cut costs in preparation for an industry-wide price war, electric vehicle manufacturer Rivian Automotive, ...

DALLAS, Texas: The Dallas Police have announced that two emperor tamarin monkeys that disappeared earlier this week from the Dallas ...

Republicans in Congress to impeach border official due to migrants

WASHINGTON D.C.: In a sign of future political battles over record numbers of illegal crossings under Democratic President Joe Biden, ...

MOSCOW, Russia: Russian state-run TASS news agency has reported that a US woman was detained and fined by a Russian ...

At US urging, Japan to stop exporting chip technology to China

TOKYO, Japan: Japan is preparing to revise legislation to allow it to restrict the export of advanced semiconductor manufacturing equipment ...