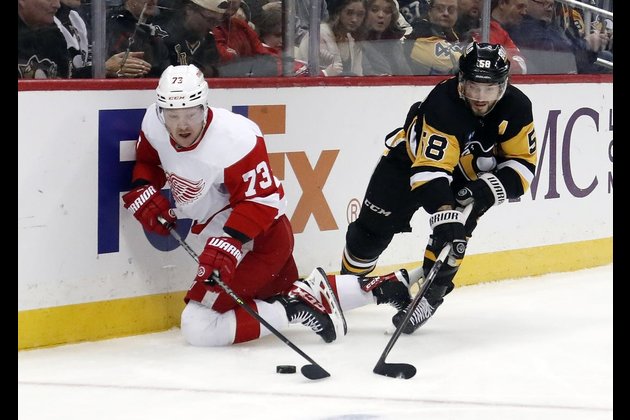 Jake Walman's sixth career goal came off a feed from Andrew Copp on a two-on-one at 2:13 of overtime Wednesday as the visiting Detroit Red Wings erased a four-goal deficit to top the Pittsburgh Penguins 5-4.

Dylan Larkin, Joe Veleno, Jonatan Berggren and David Perron also scored, and Lucas Raymond and Michael Rasmussen each had two assists for the Red Wings, who won their second straight.

Detroit goaltender Ville Husso gave up four goals on 12 shots and was replaced at the start of the second by Magnus Hellberg, who stopped all 19 shots he faced.

Jason Zucker scored twice, Jeff Carter had a goal and an assist, Drew O'Connor also scored, and Kasperi Kapanen and Bryan Rust each had two assists for the Penguins, who are 1-2-2 in their past five games.

O'Connor gave the Penguins a 1-0 lead at 2:36 of the first. He converted a short pass from Kapanen from the upper part of the right circle.

On a power play, Carter upped the lead to 2-0 at 10:15 of the first. Kapanen emerged from a multiple-player puck battle along the end boards and fed Carter, who roofed it from above the right side of the crease.

Zucker scored at 14:15 of the first. He got the puck deep along the left-wing boards, moved in on and around Husso and scored far side on a backhander.

With 32.9 seconds left in the first, Zucker poked the puck across the line during a scramble in front to make it 4-0. Carter picked up his 400th career assist.

The Red Wings began their comeback on a power-play goal at 7:17 of the second when Larkin scored from the right hash marks, cutting it to 4-1.

Berggren made it a one-goal game at 15 minutes of the third when he scored short side from the bottom of the right circle.

Perron tied it 4-4 at 16:52 of the third with a power-play goal on a shot inside the left post from the near dot.

WASHINGTON D.C.: The Biden administration has stopped issuing export licenses to US companies seeking to ship most items to China's ...

WASHINGTON D.C.: Tesla confirmed this week that the US Justice Department has requested documents related to its Full Self-Driving and ...

US ending Covid emergency programs on May 11

WASHINGTON D.C.: The Biden administration said this week that it will end US COVID-19 emergency declarations on 11th May, nearly ...

After 11,000 US flights disrupted, FAA updates its computers

WASHINGTON D.C.: In a letter to lawmakers last week, the US Federal Aviation Administration (FAA) said it had put in ...

WASHINGTON D.C.: The Biden administration has stopped issuing export licenses to US companies seeking to ship most items to China's ...

US concerned over rights at Mexico auto factory, seeks corrections

WASHINGTON D.C.: The US has again asked Mexico to investigate claims that workers at an auto parts facility of American ...